Oops! How to learn from your mistakes 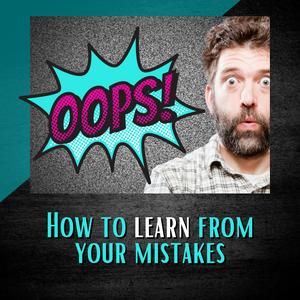 So... there was this time when we were in a musical together.

It was a regional premiere, we both had GREAT roles, and people were literally lined up around the block to get in.

However, (Kevin's gonna kill me for telling you this), during opening week, he completely jumped a song.

Luckily, my back was to the audience. Unfortunately, I couldn't stop laughing. (Also, luckily for Kevin, neither could Todd.)

Did anyone die? No. Will Kevin EVER live it down? Also, NO.

But, did Kevin ever, ever, ever skip that song again? Absolutely not. Not during the hundreds of shows we did- not even when we were totally jet lagged in Europe.

So, other than embarrassing Kevin, why bring up this long lost song today?

Because we all make mistakes. NO ONE is perfect.

In fact, we WANT you to make mistakes.

Yep, we said it. Go out there and fail. Fall on your face, trip coming up the stairs, tuck your skirt into your tights. We don't care.

What you do about it afterwards is what matters.

Here are a few ways to brush yourself off and make the most of those mistakes.

Acknowledge the mistake and let it go.  Figure out what really went down.

Let's say Paul walks into an audition, and in his eagerness to make a great impression, he calls the casting director by the wrong name...the entire time. But, he doesn't realize it AFTER he's left the room... 🤦

Instead of beating himself up for it, he can acknowledge that it happened and move on. Dwelling on it doesn't do him any good, and chances are the CD shrugged it off.

There are plenty of other people in this world who will kick you around for making mistakes. You don't need to pile it on.

What did you learn from this? Discover why it happened.

For example: Sarah was called back and sent the sides for a role she's always DREAMED of playing...or so she thought.

But, it turns out she was called back for a different role. Whoops. 🤭

In the excitement of getting the notice, she failed to read the email carefully, which resulted in preparing the wrong sides... which led to a not-so-great audition.

Make a plan to move forward. Now that you know the what and why, form new habits.

Take your new-found knowledge and use it to your benefit.

Instead of beating herself up for it, Sarah can turn the cringeworthy callback into a teachable moment. She realized she needs to thoroughly read and RE-read every correspondence to avoid repeating this mistake.

And Paul learned to ask the proctor the names of those in the room, and write them down for future reference, BEFORE he walks into a room.

But, here's the thing. If you don't make mistakes, you'll never grow. And, to become the artist you want to be, you must learn new things.

If you don't, you'll find yourself taking fewer and fewer risks and eventually giving up on your dreams.

And we believe you're reading this article because you're meant to be here. Right now.